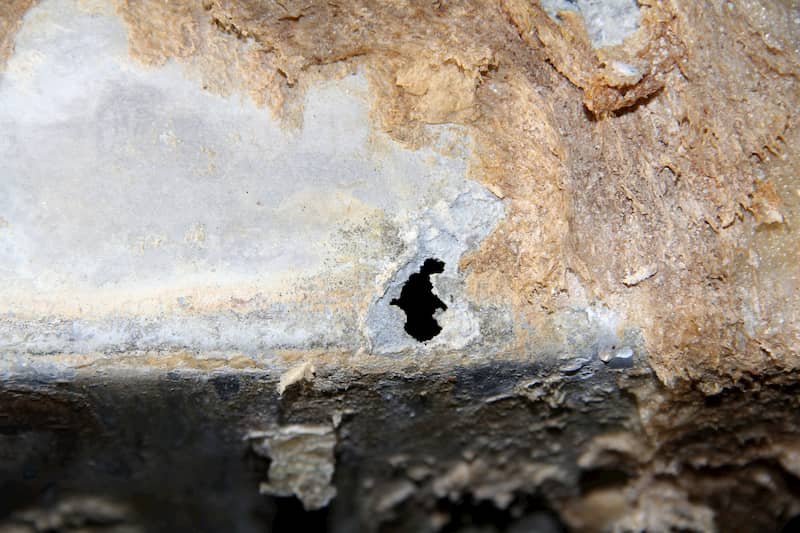 Aluminium is the second most abundant metal on earth and due to its excellent properties, is one of the most widely used metals today. Therefore, it is useful to be aware of the conditions that shorten the lifetime of these metals.

Corrosion of any metal can significantly impact its functional strength causing structural damage like cracks, partial fracture, and total material failure in extreme cases. In this article, we shall take an in-depth look into aluminium corrosion to help understand the different types of corrosion that can affect the metal.

What is Aluminium Corrosion?

Aluminium corrosion is the gradual decay of aluminium molecules into its oxides that degrades its physical and chemical properties.

By nature, aluminium is a reactive metal but it is also a passive metal.

It means that while nascent aluminium will react with oxygen and water in the environment, the resulting compound will form a layer on the surface protecting the material underneath from further corrosion. This non-reactive oxide layer sticks well to the surface and does not flake off easily, similarly to stainless steel.

Unlike deliberate processes like laser etching, aluminium anodising, or brightening, corrosion is a slow process and will occur over many months or years. What makes aluminium unique though is that there are many different types of corrosion pathways. Understanding these different corrosion phenomena is the first step in applying control measures to reduce or completely prevent their occurrence.

Atmospheric corrosion can be divided into three subcategories. These are dry, wet and damp, depending on the moisture levels of the service environment.

As the moisture content can change quite a bit depending on your geographical location, some regions will observe greater corrosion than others.

Other environmental factors that affect the extent of atmospheric corrosion are wind direction, temperature and precipitation changes. Concentration and variety of pollutants in the air, closeness to large water bodies, etc. also play a significant role.

Atmospheric corrosion may be exacerbated if the design does not allow for drainage of moisture. Creating pockets of water for rain and condensation, for example, are harmful design flaws.

Galvanic corrosion, also known as dissimilar metal corrosion can affect aluminium when it is physically or through an electrolyte connected to a noble metal. The noble metal can be any metal that has lesser reactivity compared to aluminium.

The intensity of corrosion is highest at the intersection, where the two metals meet, and reduces as we go further away from this interface.
For example, if aluminium and brass are in contact or even close to each other and placed in seawater, a galvanic cell is formed. Then the aluminium part will corrode as it acts as the anode (positive terminal).

This can be a problem in boats where brass fittings may be close to aluminium fittings while they are both immersed in seawater. The electrons flow from aluminium to brass through the seawater. 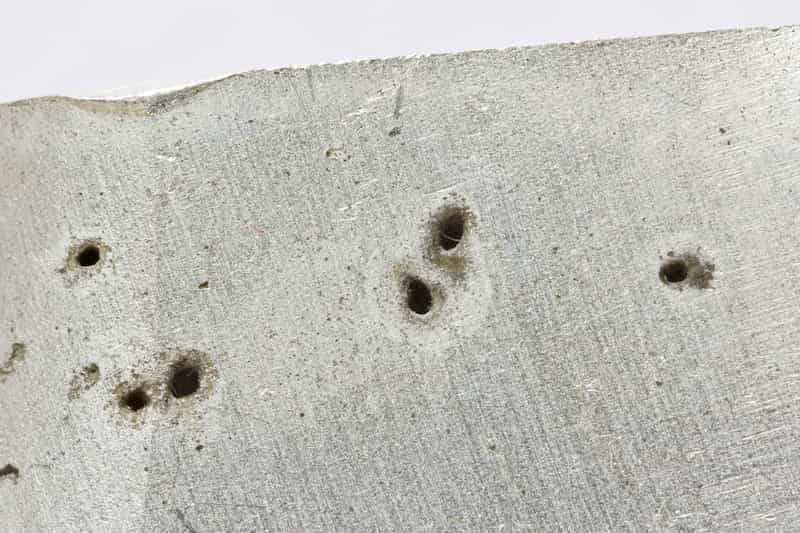 Pitting corrosion is a surface corrosion phenomenon of aluminium metal characterised by small holes (pits) on the surface. Usually, these pits do not affect the strength of the product. Rather, it is an aesthetic issue but can lead to failure if surface appearance is critical.

For pitting corrosion to occur, the alloy’s potential must be above the electrolyte’s (salt solution) potential. The existence of surface defects at grain boundaries and second-phase particles is a precursor to pitting corrosion. 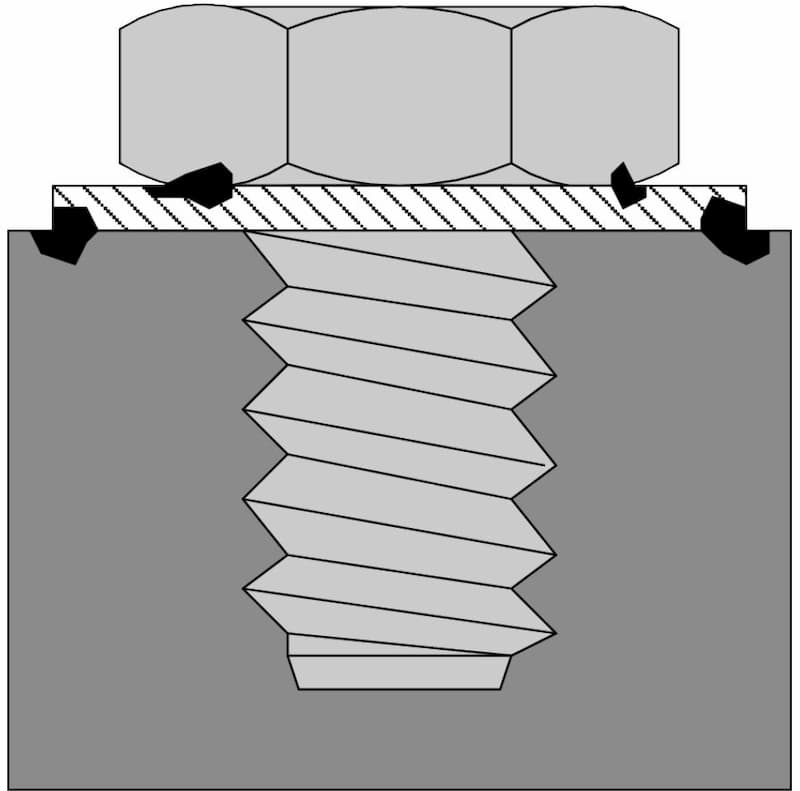 Even a small gap between a bolt and the structure is enough for this type of corrosion to begin. As time passes, aluminium from the material dissolves and precipitates into seawater. This ionic aluminium absorbs oxygen from the surrounding air and hydroxide ions from the electrolyte, forming aluminium hydroxide.

This oxygen reduction makes the crevice acidic in the presence of chlorides which accelerates the rate of corrosion.

When it comes to aluminium, the grain boundary is electrochemically different compared to the alloy microstructure. This causes an electrochemical potential set up between the two and an exchange of electrons takes place.

Like pitting corrosion, intergranular corrosion begins from a pit. However, it propagates far more quicker along susceptible grain boundaries.

Exfoliation corrosion is a special type of intergranular corrosion found in aluminium alloys that have marked directional structures. This is predominantly evident in aluminium products that have undergone hot or cold rolling processes.

It occurs along elongated grain boundaries in the microstructure. The term exfoliation comes from the fact that the corrosion product is more voluminous and gives the impression of lifting from the material surface.

This type of aluminium corrosion expands above the surface as well as sideways building up stresses in the product. In turn, this causes a wedging action initially at the surface before it migrates into the bulk of the product. Severe delamination takes place and the material weakens. Surface degradation results like pitting, flaking, and blistering can occur.

The susceptibility to exfoliation corrosion can be modified by using heat treatment methods to redistribute the precipitates.

When corrosion takes place almost uniformly on an aluminium product surface, it is uniform or general corrosion.

This type of corrosion can happen with products constantly exposed to a highly acidic or alkaline medium. It may also occur in the presence of high electrochemical potential while the product is in an electrolyte. A typical example is rusting of an aluminium plate in an acidic solution.

Uniform corrosion is the result of the continuous shifting of anode and cathode regions in contact with the electrolyte which manifests as a uniform corrosive attack on the surface.

In high and low pH solutions, the oxide layer is also unstable and does not protect the metal underneath. The thickness of the material reduces and it will eventually dissolve completely.

The attack is not completely uniform and there will exist peaks and valleys. The absence of small deep corroded areas is enough to term it as a general corrosion example.

Deposition corrosion occurs when a dissimilar metal gets deposited on the aluminium surface leading to serious localised corrosion.

These ions now form a subtle galvanic cell which corrodes the aluminium through pitting if the ions are lower in the electrochemical or galvanic series. The larger the difference between aluminium and the deposited ion in the galvanic series, the worse the corrosion.

Even a concentration of 1 ppm copper ion solution is known to perform serious corrosion on the aluminium surface.

The metals that can cause deposition corrosion of aluminium are referred to as ‘heavy metals’. Some important heavy metals are copper, mercury, tin, nickel, and lead. 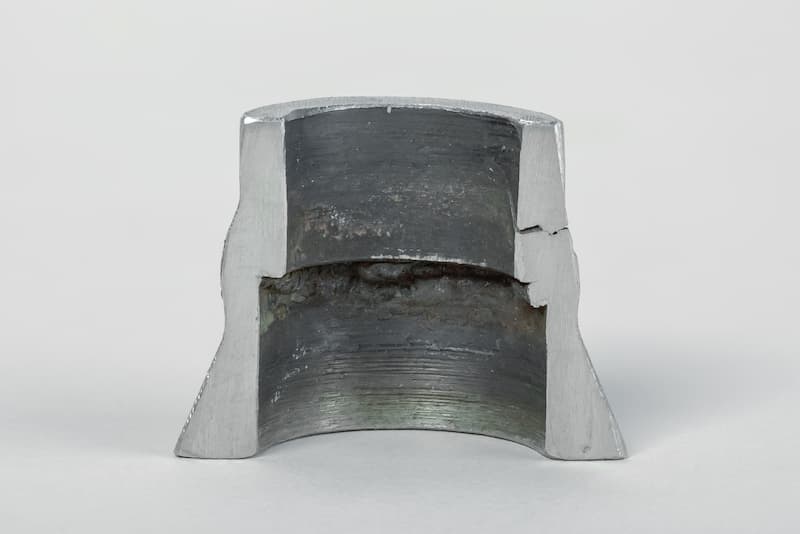 Stress corrosion cracking (here on out referred to as SCC) is a form of intergranular corrosion that can result in the total failure of aluminium parts.

Three conditions need to be fulfilled for this corrosion to occur. A susceptible alloy is the first of them. Not all aluminium alloys are equally prone to SCC. High yield strength alloys are more likely to suffer from stress corrosion cracking. 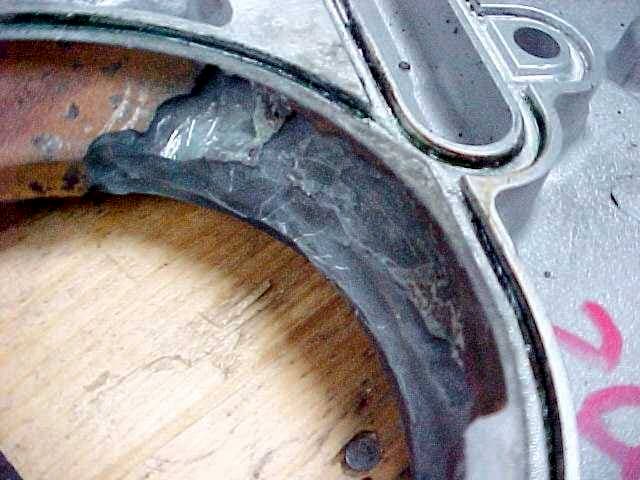 Erosion corrosion of aluminium is caused by the impingement of a high-speed water jet on the aluminium body.

Two factors that aggravate erosion-corrosion are the velocity of the water and its pH level. The existence of carbonate and silica content in water can further augment the corrosion rate.

In pure water, aluminium corrosion proceeds at a sluggish rate. But when the pH level exceeds 9, this rate increases. In acidic water, corrosion is faster.

Erosion corrosion can be prevented by controlling the above factors. Either reducing the water velocity, or maintaining water quality, or both can significantly reduce erosion-corrosion. Improving the water quality means maintaining the pH level as close to neutral as possible (<9), and reducing silica and carbonate content.

It is a well-known fact that fatigue can cause the complete failure of a product if left unchecked. In the case of aluminium, fatigue cracks can act as initiation sites for pitting corrosion.

Corrosion fatigue in aluminium occurs when it is repeatedly subjected to low stress for long periods of time. The crack initiation and propagation takes place with greater ease in a corrosive environment like seawater and salt solutions.

Corrosion fatigue cannot proceed without the presence of water in the atmosphere. It also remains largely unaffected by stress direction as the crack propagation is mostly transgranular. Thus, the stresses do not affect its propagation unlike in the case of SCC.

Filiform or wormtrack corrosion is initiated as pitting corrosion. It starts at points where the paint has peeled off the surface of the aluminium. The reason could be scratches or bruises on the surface that expose the underlying metal surface.

Filiform corrosion occurs and spreads easily in the presence of chloride anions and high humidity. Though it initiates as saltwater pitting corrosion, the mode of propagation is that of crevice corrosion.

Filiform corrosion can be prevented by keeping the surface free of damage and closing all the small gaps using paint or wax. The relative humidity of the environment must be reduced if practical.

Microbiological induced corrosion or MIC is corrosion caused due to microorganisms/fungi. This type of corrosion is noticed in fuel and lubrication oil tanks.

In the presence of water in oil, microbes and fungi can thrive. Some of these organisms are capable of consuming oil and excreting acids that can cause corrosion of the aluminium vessel used for storing.

This acid causes pitting corrosion in the aluminium vessel, eventually leading to leakage.

To prevent this, the oil must be purified as far as possible to remove water content. Draining water at regular intervals from fuel tanks after purification is also necessary. If improving the fuel quality is not an option, using fungicides is possible to prevent germination.