What Is Heat Treatment? Methods & Benefits 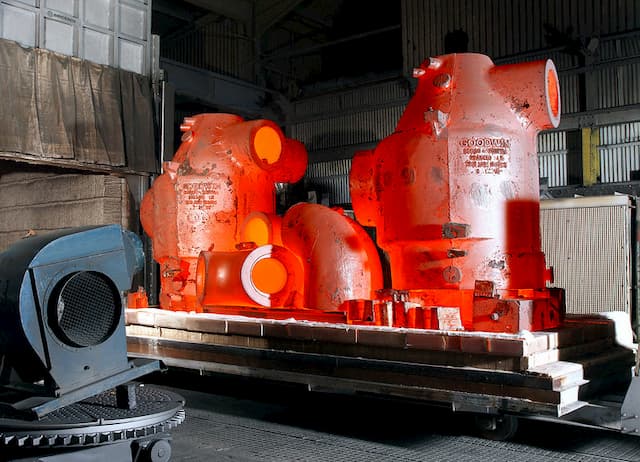 Heat treatment is the process of heating and cooling metals, using specific predetermined methods to obtain desired properties. Both ferrous as well as non-ferrous metals undergo heat treatment before putting them to use.

Over time, a lot of different methods have been developed. Even today, metallurgists are constantly working to improve the outcomes and cost-efficiency of these processes.

For that they develop new schedules or cycles to produce a variety of grades. Each schedule refers to a different rate of heating, holding and cooling the metal.

These methods, when followed meticulously, can produce metals of different standards with remarkably specific physical and chemical properties.

There are various reasons for carrying out heat treating. Some procedures make the metal soft, while others increase hardness. They may also affect the electrical and heat conductivity of these materials.

Some heat treatment methods relieve stresses induced in earlier cold working processes. Others develop desirable chemical properties to metals. Choosing the perfect method really comes down to the type of metal and the required properties.

In some cases, a metal part may go through several heat treatment procedures. For instance, some super alloys used in the aircraft manufacturing industry may undergo up to six different heat treating steps to optimise it for the application.

The final outcome depends on many different factors. These include the time of heating, time of keeping the metal part at a certain temperature, rate of cooling, surrounding conditions, etc. The parameters depend on the heat treatment method, type of metal and part size.

Over the course of this process, the metal’s properties will change. Among those properties are electrical resistance, magnetism, hardness, toughness, ductility, brittleness and corrosion resistance.

As we already discussed, the microstructure of alloys will change during heat treatment. Heating is carried out in line with a prescribed thermal profile.

An alloy may exist in one of three different states when heated. It may either be a mechanical mixture, a solid solution, or a combination of both.

On the other hand, in a solid solution, all the components are mixed homogenously. This means that they cannot be identified individually even under a microscope.

Every state brings along different qualities. It is possible to change the state through heating according to the phase diagram. The cooling, though, determines the final outcome. It is possible for the alloy to end up in one of the three states, depending solely on the method.

During the holding, or soaking stage, the metal is kept at the achieved temperature. The duration of that depends on the requirements.

For example, case hardening only requires structural changes to the surface of the metal in order to increase surface hardness. At the same time, other methods need uniform properties. In this case, the holding period is longer.

The soaking time also depends on the material type and part size. Larger parts need more time when uniform properties are the objective. It just takes longer for the core of a large part to reach the required temperature.

After the soaking stage is complete, the metal must be cooled in a prescribed manner. At this stage, too, structural changes occur. A solid solution on cooling may stay the same, become a mechanical mixture completely or partially, depending on various factors.

It is also possible to use furnaces in the cooling process. The controlled environment allows for high precision when slow cooling is necessary.

Each metal alloy has its own phase diagram. As previously said, heat treatment is done according to these diagrams. They show the structural changes that take place at different temperatures and different chemical compositions.

Let’s use the iron-carbon phase diagram as an example, as this is the most known and widely taught one at universities. 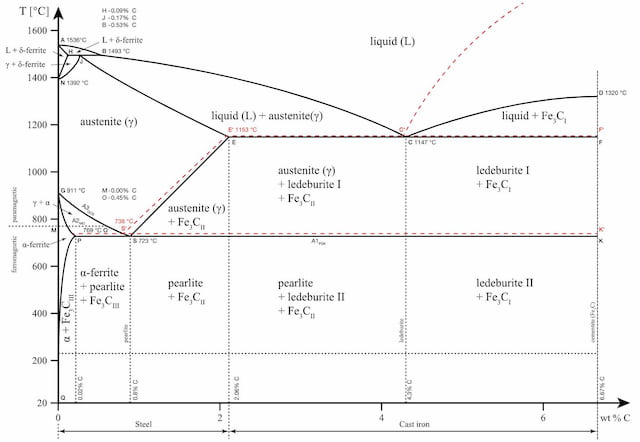 The iron-carbon phase diagram is an important tool when learning about the behaviour of different carbon steels when subjected to heat treatment. The x-axis shows the carbon content in the alloy and the y-axis shows the temperature.

Note that 2.14% of carbon is the limit where steel becomes cast iron,

The diagram displays various regions where the metal exists in different microstates such as austenite, cementite, pearlite. These regions are marked by boundaries A1, A2, A3, and Acm. At these interfaces, phase changes occur when the temperature or carbon content value passes through them.

A1: The upper limit of the cementite/ferrite phase.

A3: The interface that separates Austenite + Ferrite phase from the γ (Gamma) austenite phase.

Acm: The interface that separates γ Austenite from the Austenite + Cementite field.

The phase diagram is an important tool to consider whether heat treatment will be beneficial or not. Each structure brings along certain qualities to the final product and the choice of heat treatment is made based on that.

There are quite a few heat treatment techniques to choose from. Every one of them brings along certain qualities.

The most common heat treatment methods include:

In annealing, the metal is heated beyond the upper critical temperature and then cooled at a slow rate.

Annealing is carried out to soften the metal. It makes the metal more suitable for cold working and forming. It also enhances the metal’s machinability, ductility and toughness.

Annealing is also useful in relieving stresses in the part caused due to prior cold working processes. The plastic deformations present are removed during recrystallisation when the metal temperature crosses the upper critical temperature.

Normalising is a heat treatment process used for relieving internal stresses caused by processes such as welding, casting, or quenching.

In this process, the metal is heated to a temperature that is 40° C above its upper critical temperature.

This temperature is higher than the one used for hardening or annealing. After holding it at this temperature for a designated period of time, it is cooled in air. Normalising creates a uniform grain size and composition throughout the part.

Normalised steels are harder and stronger than annealed steel. In fact, in its normalised form, steel is tougher than in any other condition. This is why parts that require impact strength or need to support massive external loads will almost always be normalised.

The most common heat treatment process of all, hardening is used to increase the hardness of a metal. In some cases, only the surface may be hardened.

A work piece is hardened by heating it to the specified temperature, then cooling it rapidly by submerging it into a cooling medium. Oil, brine or water may be used. The resulting part will have increased hardness and strength, but the brittleness increases too simultaneously.

Case hardening is a type of hardening process in which only the outer layer of the work piece is hardened. The process used is the same but as a thin outer layer is subjected to the process, the resultant work piece has a hard outer layer but a softer core.

This is common for shafts. A hard outer layer protects it from material wear. When mounting a bearing to a shaft, it may otherwise damage the surface and dislocate some particles that then accelerate the wearing process. A hardened surface provides protection from that and the core still has the necessary properties to handle fatigue stresses.

Other types of hardening processes include induction hardening, differential hardening and flame hardening. Flame hardening, however, may result in a heat affected zone that is created once the part is cooled.

Ageing or precipitation hardening is a heat treatment method mostly used to increase the yield strength of malleable metals. The process produces uniformly dispersed particles within a metal’s grain structure which bring about changes in properties.

Precipitation hardening usually comes after another heat treatment process that reaches higher temperatures. Ageing, however, only elevates the temperature to medium levels and brings it down quickly again.

Some materials may age naturally (at room temperature) while others only age artificially, i.e. at elevated temperatures. For naturally ageing materials, it may be convenient to store them at lower temperatures.

Stress relieving is especially common for boiler parts, air bottles, accumulators, etc. This method takes the metal to a temperature just below its lower critical border. The cooling process is slow and therefore uniform.

This is done to relieve stresses that have built in up in the parts due to earlier processes such as forming, machining, rolling or straightening.

Tempering is the process of reducing excess hardness, and therefore brittleness, induced during the hardening process. Internal stresses are also relieved. Undergoing this process can make a metal suitable for many applications that need such properties.

he temperatures are usually much lower than hardening temperatures. The higher the temperature used, the softer the final work piece becomes. The rate of cooling does not affect the metal structure during tempering and usually, the metal cools in still air. 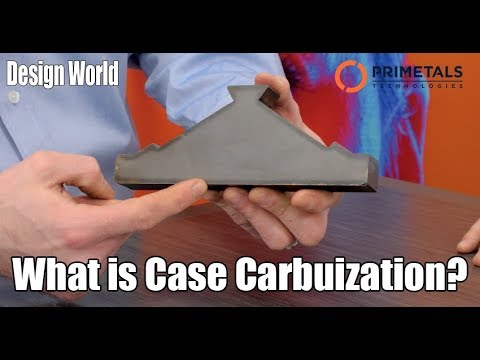 In this heat treatment process, the metal is heated in the presence of another material that releases carbon on decomposition.

The released carbon is absorbed into the surface of the metal. The carbon content of the surface increases, making it harder than the inner core.

What Metals Are Suitable for Heat Treating?

Although ferrous metals account for the majority of heat treated materials, alloys of copper, magnesium, aluminium, nickel, brass, and titanium may also be heat treated.

About 80% of heat treated metals are different grades of steel. Ferrous metals that can be heat treated include cast iron, stainless steel and various grades of tool steel.

Copper and copper alloys are subjected to heat treatment methods such as annealing, ageing and quenching.

Aluminium is suitable for heat treatment methods such as annealing, solution heat treating, natural and artificial ageing. Heat treatment for aluminium is a precision process. Process scope must be established and it should be controlled carefully at each stage for the desired characteristics.

Evidently, not all materials are suitable for the forms of heat treatment. Similarly, a single material will not necessarily benefit from each method. Therefore, every material should be studied separately to achieve the desired result. Using the phase diagrams and available information about the effect the aforementioned methods have is the starting point.