What Gases Are Used for Oxyfuel Cutting? 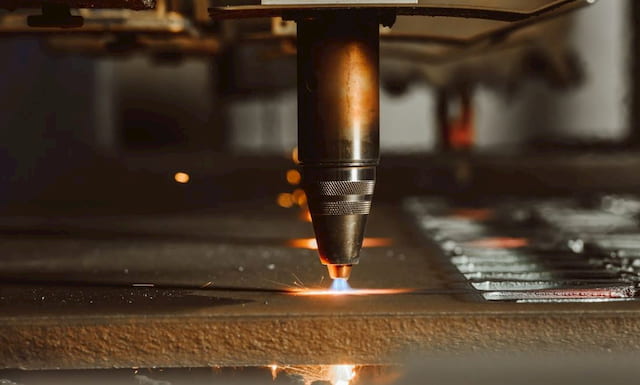 Flame cutting is a thermal metal cutting method. Its primary advantage is the ability to cut very thick metal plates – usually up to 150 mm. In extreme cases, the metal thickness can go much (e.g. 1200 mm) above the aforementioned figure but this is not available with every manufacturer. 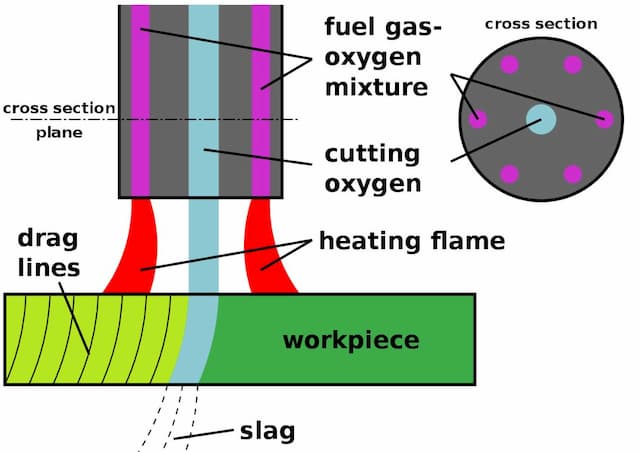 First, a mixture of cutting gas and oxygen is directed onto the workpiece through a cutting torch to preheat it. The objective is to achieve the ignition temperature, which is around 700…900° C for carbon steel.

The temperature has to be well below the melting point, which is why flame cutting is unusable for some metals like aluminium.

Next comes a jet of pure oxygen. A chemical reaction occurs after igniting the metal, resulting in oxidation. And here lies the reason why flame cutting is not suitable for cutting stainless steel.

Lastly, the high-pressure oxygen jet blows away the slag, or iron oxide, cutting the metal in the process.

So the name of the process is pretty self-explanatory. The cutting method uses both oxygen and a cutting gas. But a variety of different gases are available.

Oxy-acetylene cutting has pretty much become synonymous with oxyfuel cutting. The reason is that this is the most common fuel used in the process.

The main reason for that is the temperature it can achieve – around 3200° C. Such a high temperature makes faster piercing and cutting possible. At the same time, its secondary flame temperature is comparatively low. For the same reasons, it’s the most commonly used gas combination in oxy-fuel welding.

The primary or inner flame is responsible for the cutting of the metal. The secondary, or the outside flame’s purpose is to preheat the metal.

Also, the heat-affected area is smaller compared to other gases as the exposure time for heating is shorter.

The ratio of oxygen to acetylene is about 1.2:1.

Another fuel gas that can reach quite high temperatures. The maximum is around 2800° C.

Compared to acetylene, the concentration of the flame is smaller, resulting in a larger HAZ and longer piercing time.

The cutting speed is comparable, though.

The ratio of oxygen to propane is around 4.3:1. Thus, reaching the maximum temperature requires around 3.5 times more oxygen than oxy-acetylene cutting.

Propylene is fast catching up with acetylene in the extent of use for flame cutting.

There are several reasons for that. Firstly, its rate of use – the same amount of fuel lasts five times more than acetylene. Also, propylene is actually quicker for cutting, producing less slag in the process.

The flame temperature is around 2900° C. The quickness advantage derives from the higher temperature of the secondary flame.

This is a mix of different hydrocarbons.

MAPP temperatures are lower than acetylene and the heating area is wider. So the piercing time is slower and the same applies to the cutting speed.

There is, however, a good reason for using MAPP. And that is underwater jobs because MAPP is not as likely as others to dissolve to separate components in a marine environment.

The slowest one on the list for piercing and cutting. LPG, though, is quite readily available commercially and is therefore a good alternative to the other fuel gases here on the list.