Profile of a Line (GD&T) Explained

GD&T lists fourteen different geometrical tolerances according to ASME Y14.5-2009. These tolerances allow us to control and define part features in different ways. For ease of understanding, these fourteen tolerances have been segregated into five different groups based on similarities between them. These five groups are form, profile, orientation, location and runout.

In this article, we shall take a look at the profile of a line tolerance that belongs to the profile group along with profile of a surface. Line profile tolerance is quite common and it helps us to manufacture parts with complex shapes. But first, let’s start by defining what it is.

What Is Profile of a Line in GD&T?

The profile of a line tolerance is a 2D GD&T callout that can define and control a linear/curved feature or a surface cross-section within specified limits. We can use it to control the form, location, orientation and size of a feature. This callout can only be used on surfaces and cannot be used to locate a central axis or plane.

The line profile callout is typically used in the case of complex curves. These could be simple or advanced algebraic curves. The callout simply mimics the curve irrespective of the complexity.

Profile of a Line Tolerance Zone

Line Profile vs Other Callouts 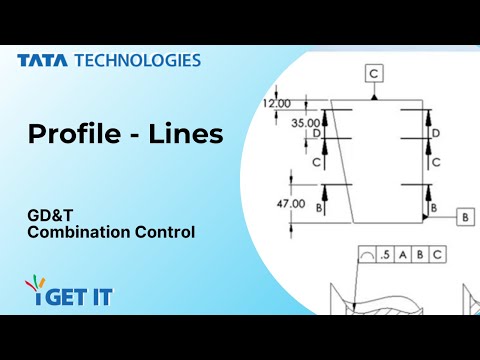 GD&T Profile of a Line

Profile of a line vs straightness/circularity tolerance

The feature control frame (FCF) for any GD&T callout contains all the information required to correctly define how it applies to a feature or surface. It connects to the feature using an arrow known as the leader arrow. A typical FCF consists of three main blocks. These are: 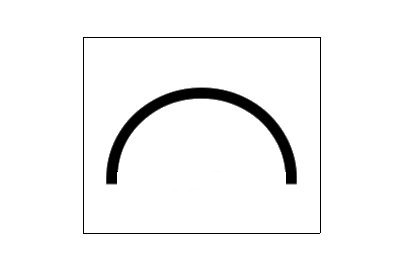 This block gives information about the type of geometric tolerance applied to a feature. The tolerance is represented by its symbol in the first block. The symbol for profile of a line is an inverted semicircle.

In the case of profile of a line, the tolerance zone is a 2- dimensional total wide tolerance zone. This zone is distributed bilaterally in relation to the true profile. This is the default zone and requires no special notation.

This is followed by the tolerance limit which specifies the width of the tolerance zone. The third symbol is for material modifiers but these do not apply when using profile of a line. This callout is only controlled by basic dimensions.

This block represents datum elements that are used as references to locate/orient a part feature. Profile of a line tolerance may or may not be called out with a datum. In the absence of a datum, the line profile tolerance acts as a form control (such as straightness, circularity, flatness, etc) and is a refinement of a size tolerance.

With one or two datums, profile of a line controls the orientation besides the form. Location requires two to three datums. Whenever we use a datum, it is important to notify the distance using basic dimensions. Using basic dimensions, a profile control can also control the feature size.

How to Measure Profile of a Line

The means to measure the line profile will depend on the type of curve. The profile tolerance can very well be used as a replacement for different form controls in which case a simple setup consisting of a dial gauge and a surface plate would be sufficient.

When it comes to complex curves, more advanced and reliable instruments such as a CMM, VMM (vision measuring machine) or a 3D scanner are required. In each case, the actual surface must lie within the tolerance zone to prevent rejection. For complex curves, we trace the contour of a part using a probe, record multiple measurements and compare it to a virtual boundary through a CMM.

Uses for Profile of a Line Tolerance

A large number of parts in modern machines feature advanced curves and cross-sections that have to be manufactured accurately for functional reasons such as aerodynamics, ergonomics, etc. The profile of a line tolerance helps us achieve that. It can accurately define and communicate geometry requirements for parts with curved shapes. Some examples of parts where we use profile of a line are: