Profile of a Surface (GD&T) Explained

GD&T consists of 14 geometrical tolerances that can be applied to any part feature to control them. These tolerances are described in detail in ASME Y14.5-2009.

Many of these 14 tolerances have features similar to each other in the way they control a part’s shape and dimensions, therefore it is important to understand what is the intended use of the part beforehand.

For ease of use, these 14 tolerances are divided into five main groups.

In this article, we shall study the profile of a surface (or surface profile) callout that is part of the profile group mentioned above. These two callouts can help us manufacture geometries that have complex outer shapes with impressive details.

What Is the Profile of a Surface in GD&T?

The profile of a surface is an extremely powerful and versatile GD&T callout. It can be used on nearly all kinds of complex outer shapes where other tolerances are not easily applicable.

Some examples of surface profile use: 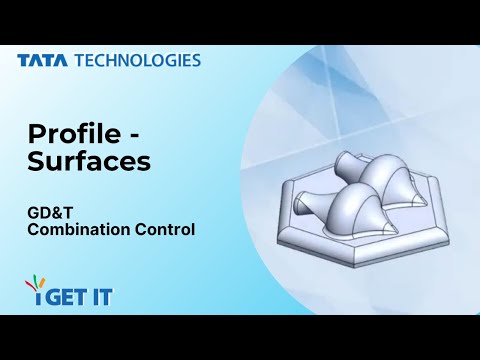 GD&T Profile of a Surface

Profile of a surface controls a part’s surface profile in accordance with the CAD model or the drawing. Many engineering parts such as turbine blades, car BiWs and airplane wings have highly complex surfaces. These surfaces need to be manufactured to great detail for functional reasons. The profile of a surface callout can help us manufacture these parts by controlling the surface profile during manufacturing and measuring results after production.

The profile of a surface generates a virtual surface that acts as the baseline to measure the actual surface. Thus, it is possible to create highly intricate surface profiles as long as they can be created as a CAD model. The required surface’s specification must also be within the capabilities of the fabrication process to be used.

The surface profile tolerance zone consists of two parallel planes, bilaterally disposed on each side of the ideal curved surface (aka the true profile). Both planes follow the shape of the ideal surface and the distance between them is the tolerance limit for the callout. A smaller tolerance limit gives tighter control but may be difficult to manufacture. The points on the part’s entire surface must lie within the specified tolerance zone for it to be accepted.

As mentioned above, the profile of a surface can effectively replace almost all of the GD&T Callouts whether they are curved or flat. Let’s see a few examples:

Profile of a surface vs form controls

When used without a datum, the profile of a surface can replace all the form controls.

The four form controls are

These form controls constrain the form of a part by creating a tolerance zone between two parallel surfaces. These planes can be either flat or cylindrical.

Profile of a surface vs orientation controls

When used with a datum callout, the profile of a surface can replace all the orientation controls.

The orientation controls are:

In order to orient a part feature in GD&T, we need a reference point such as a datum plane, line, or axis. By specifying a datum in the profile of a surface’s feature control frame, we can replicate the function of all orientation controls to maintain a surface in a particular position.

Profile of a surface vs line profile tolerance This block defines the geometrical tolerance applied to a feature by housing its symbol. The profile of a surface symbol is an inverted semicircle with a horizontal diameter connecting its two ends.

This number is typically followed by material condition modifiers (MMC, LMC, etc.), but these do not apply to the profile of surface control.

This is the third block in GD&T that houses the reference planes for the tolerances. In the case of a profile of surface control, the use of a datum is optional. When a datum is not present, the callout only controls the feature’s form. But if we want to control additional aspects such as the orientation, location, and size, we must define one or more datums as needed.

When to Use Profile of a Surface Tolerance?

As mentioned in the above examples, the profile of a surface can effectively replace almost all of the form and location tolerances. So the question then becomes:

Why isn’t it used everywhere?

The answer boils down to pricing. In order to measure the surface profile, the part has to be measured via a CMM machine. CMM machines can measure either with a probe or with a laser. Regardless both of these options are expensive because:

Hence it is strongly advised to engineers to make sure that the surface profile tolerance is necessary and no other GD&T can fulfil the requirement.

Here are some best practices and important points to consider when using the profile of surface tolerance.

Therefore it is extremely important that tolerance chain analysis is conducted beforehand to find the numerical values that are put in the drawing.

The surface profile is an extremely powerful GD&T symbol that can be used for complex surface profiles for all kinds of parts. However, it should be used keeping in mind the associated costs for measuring and verification of parts.