What is Cutting Kerf? Comparison of Cutting Methods

Cutting kerf is the width of a cut. It is the result of material removal during the cutting process.

There are also cutting methods that lead to no loss of material. Some examples are cutting with scissors and shearing. However, the automated nature of the aforementioned thermal cutting processes make them widely used in engineering. Furthermore, there are scenarios where a cutting kerf is actually desirable.

Each cutting process produces a cut with a different width. So this article brings out the differences of the following methods:

Laser cutting, as it is obvious from the name, is a cutting technique in which a laser is used to cut through a material. The laser finds a lot of use because of its precision. It comes largely down to the laser’s cutting kerf.

In case of laser cutting, there are two factors that decide the width of the cutting kerf. These factors are beam width and material. The width of the beam is established by the focal length set out by the laser lens.

Although it is possible to cut plastics with laser cutting, the kerf width is larger there. During the cooling process, plastics shrink and the gap widens.

One of the main limitations of a plasma cutting service is its limitation to conductive materials only. Hence, plasma can only be used on copper and its alloys, stainless steel, iron etc. and not on insulating materials such as plastic, wood etc.

Using the plasma cutting technique, the smallest value of kerf that can be obtained is 3.8 mm. Hence, it is less accurate than laser cutting.

Note that the value of kerf is not constant for a given process. Rather a number of factors govern it and are capable of altering it.

More power will be required to cut thick materials. Thus, you need to use a larger nozzle and a higher electrical current. This, in turn, results in a larger cut width.

Waterjet cutting uses a stream or a jet of water to cut a material. Sometimes, abrasives might also be mixed with the water in order to achieve better results. While waterjet cutting has many benefits, its price renders it mostly usable for industrial purposes only.

A nozzle is used to concentrate the water on a specific point and thus obtained impeccable cuts. The value of the cutting kerf obtained from this technique is 0.9 mm.

Hence, this method produces better results than plasma but does not reach the accuracy of laser cutting.

The fourth technique that will be explained in this article is oxy-fuel cutting. This is the most popular choice for cutting really thick metal parts because its comparatively low price against waterjet.

For oxy fuel cutting, a mixture of oxygen and fuel (propane, hydrogen acetylene, in compressed form) is ignited to produce a flame using an electrical arc. An important factor here is the need to produce the arc that limits the material types. This means that it suits only metals, but not all of them either. For example, non-ferrous metals are not suitable for this method.

Again, more power (fuel) shall be required to cut a thicker metal. Thus, the final cutting kerf depends on the material thickness.

Flame cutting produces a cutting kerf around 1.1 mm. Hence, it has a higher accuracy than the plasma cutting technique but less than the remaining two techniques, i.e. waterjet and laser cutting.

Comparing the different methods, the cutting kerfs look like this: 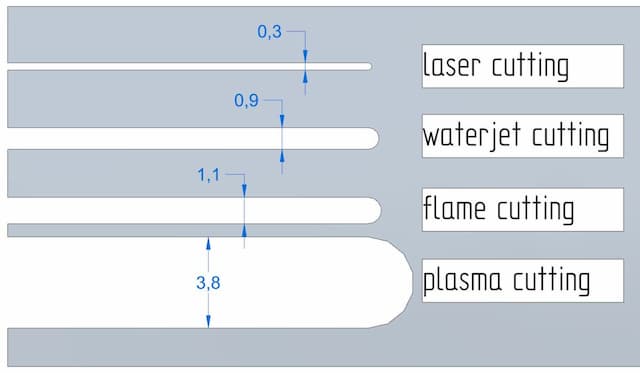 As each cutting technique has different cutting kerfs, they have to be taken into account when setting up the machine for work. Let’s use plasma cutting as an example because it has the largest cut width. 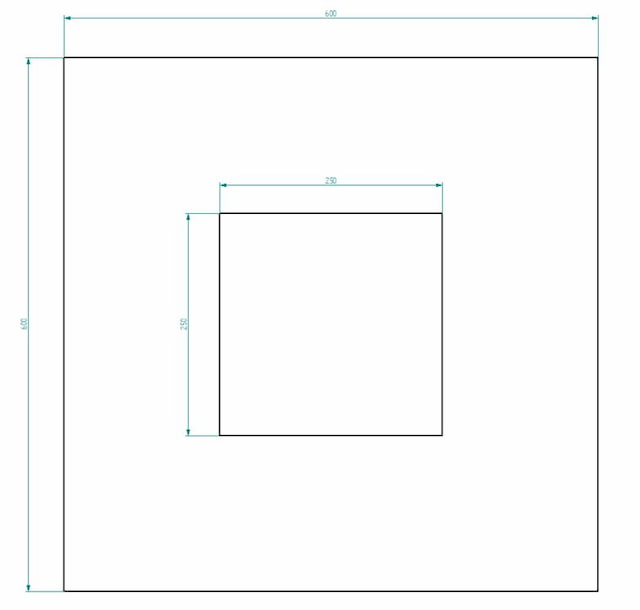 If you want to cut this 600×600 mm sheet, the machine operator makes sure that the cut isn’t done following the lines. Otherwise, you end up with a smaller part.

The same applies to the inner cutout. While the part itself has to have the cutting line outside of the drawn contour, the inner cutout uses reverse logic. Otherwise the cutout would be larger than desired.

Although you can still produce your drawings with exact measurements, you should take this into consideration in the design phase.

If you now know which cutting method to use, turn to the many sheet metal fabrication possibilities on offer at Fractory!