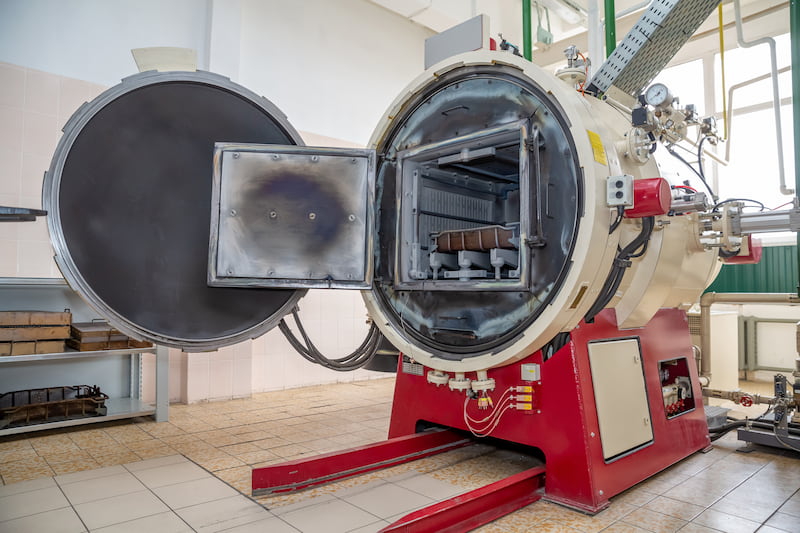 One such heat treatment process is annealing, which allows us to modify the mechanical characteristics of certain metals and alloys to better match their intended use.

Table of Contents hide
I What Is Annealing?
II The Annealing Process
III The Benefits of Annealing
IV Conclusion

The annealing process uses heat to reduce the hardness and increase the ductility and toughness of various steels, cast iron, and alloys. It involves heating the workpiece beyond its recrystallisation temperature. Doing so encourages new grain formation and allows the existing grains to reorient.

Grain rearrangement and formation relieve the internal stresses of the metal and give the crystal structure a more refined flow. This is a beneficial property for most use cases.

Because of the wide variety of steel and metal alloys, there are many specialised types of annealing processes available. The most common ones are full or complete annealing and process annealing (aka intermediate annealing or recrystallisation annealing).

Although normalisation is often considered a separate heat treatment process, it is actually a type of annealing process where the metals are cooled at room temperature instead of letting them cool at a controlled rate inside a furnace.

When Is Annealing Used?

Annealing creates softer steel than tempering and is thus mostly used on products that do not need to endure substantial stresses. But there are many different instances when annealing is used on metal parts:

Annealing is usually done after a product undergoes mechanical operations that lead to hard and brittle metals. Bending, forming, rolling, grinding, and drawing are all apt examples of such operations. For instance, when a metal wire is drawn to reduce its size, it develops internal stresses and hardens.

The resultant hardness in worked metals makes further processing difficult and risky as the metals may crack. But further processes are an operational requirement. Thus, to return a metal to its pre-work state and make it more acceptable to subsequent operations, we carry out process annealing.

Annealing increases the ductility of the metal and reduces its hardness. This makes the workpiece more formable and machinable. Annealed metals can thus undergo further operations.

High-temperature welding processes can cause the formation of heat-affected zones (HAZ). These zones are characterised by having high hardness and brittleness. In such cases, annealing returns the HAZ’s properties closer to its original mechanical properties.

Besides affecting the formability and machinability of a material, cold working also causes internal stresses to the material. Even when there are no further operations to be performed, it is a good practice to relieve the internal stresses that crop up after various mechanical operations.

Not addressing them can lead to cracking, material fracture, distortion and other mechanical issues in the future.

Annealing enables us to relieve residual stresses and regain uniform properties in the material. This increases the service life and operational capabilities of the selected materials.

Get your laser cutting quote in seconds

The annealing process can be divided into three distinct stages.

In the recovery stage, we heat the metal to a predetermined temperature below the melting point. A heating device such as a furnace or oven is used for heating in a controlled and consistent environment.

The furnace heat reduces the number of dislocations as the atoms start migrating in the crystal lattice. This returns ductility and reduces the hardness of the material. The migration processes also eliminate internal stresses and thus this stage is known as the recovery stage.

Upon achieving this temperature, we hold the metal at it for a set amount of time. The duration depends on the desired properties and metal grade.

In this stage, the crystal structure begins reorganising itself and the formation of new grain structures begins. This reverses the effects of hardening and helps return the material properties to their pre-work levels.

The grain growth stage increases the size of the newly formed as well as the former grains once the cooling begins. Factors such as the cooling rate, atmosphere and material grade determine the phase composition and the crystal grain size and growth.

Steel and other ferrous metals are typically cooled to room temperature in the presence of still air. On the other hand, metals such as copper and brass may be either cooled slowly in air or quickly drenched in water. Compared to normalising, the cooling rate in annealing is slower.

Sometimes further operations may be required after annealing to attain the desired mechanical and chemical properties in the material.

The Benefits of Annealing

Annealing is an important heat treatment process step in manufacturing complex parts as well as those that require multiple operations to reach their final form.

But annealing requires careful planning and execution. With the awareness of the correct material composition and phase diagram, annealing can help us soften many different types of metals. It is mostly performed on carbon steel and cast iron but also on other materials such as copper, aluminium and brass for its many benefits.