Under orientation control, we have parallelism, perpendicularity and angularity tolerances. These tolerances control the orientation of a feature (such as a line, axis or surface) in respect to another reference feature (datum element).

In this article, we will explain the concept of parallelism GD&T tolerance. We will also go over its tolerance zone, feature control frame and measurement methods.

What Is Parallelism in GD&T?

Parallelism is a 3D GD&T orientation tolerance which maintains that two part features are parallel to each other. You can use it to control centerlines, center planes, cylindrical and planar surfaces parallel to the datum elements.

With both types of GD&T parallelism, the goal is to maintain parallelism (0° alignment) with the datum element (axis or plane) according to the limits specified in the feature control frame.

In the case of surface parallelism, the parallelism tolerance zone is made of two theoretically exact parallel planes. The distance between the two planes is the tolerance limit for the callout. All the points on the planar surface or center plane must lie within the two parallel planes for a part to be approved.

It is evident from the shape of the zone that the parallelism tolerance doesn’t create an angular tolerance zone to control the 0° alignment between the controlled surface and the datum plane.

Instead, it fixes the tolerance zone at a basic (or exact) 0° angle and the permissible variation is controlled by widening or tightening the two surfaces of the zone. The greater the distance between the zone’s two planes, the more error it can accommodate.

Axis parallelism creates a cylindrical tolerance zone. It is used to maintain the axis of a feature of size such as cylindrical pins or holes parallel to a datum. All the points of the feature’s center axis must lie in this cylindrical zone for a part to be in spec. In this type of zone, the permissible angular deviation can be controlled by reducing or increasing the diameter of the cylindrical zone.

Parallelism vs Other Callouts

Due to many similarities between parallelism and some other tolerances, it is often confused with flatness and other orientation controls. It is advisable to understand the difference between them for their correct application in GD&T.

Parallelism and flatness resemble each other on many levels. They both have similar tolerance zones. They essentially control the flatness of the surface they are applied to. Their measuring methods are identical.

There are some key differences though, that help us distinguish between the two. For instance, parallelism, as with all other orientation controls, cannot function without a datum. The surface’s tilt is compared with a datum plane to create the tolerance zone.

On the other hand, when flatness tolerance is used, the surface is measured against itself. The tilt does not matter as long as the flatness is within limits. With the parallelism callout, the zone may translate or shift but it cannot tilt in respect to the datum.

Parallelism and angularity are both orientation controls. They are similar in almost every way except that angularity can maintain part features at any angle between 0 and 90°, whereas parallelism can only maintain a 0° angle.

The parallelism control is applied to part features through feature control frame (FCF). A leader arrow points the FCF to a feature or its extension line. A generic FCF is divided into three main blocks for ease of understanding. These blocks are: 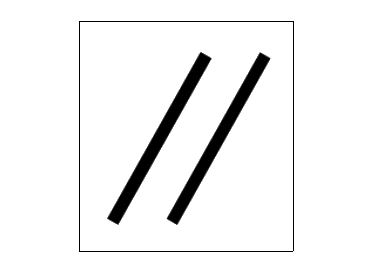 This block shows how a GD&T callout applies to a feature. The first symbol in this block is for the shape of the tolerance zone.

Axis parallelism is not commonly used but check out our article on perpendicularity for a more detailed overview of how an axis is controlled in GD&T.

Many GD&T callouts are called in reference to a datum feature. The third block in the FCF houses the datum symbol. As with other orientation controls, parallelism cannot be called without a datum element.

How to Measure Parallelism

Parallelism and flatness have similar measurement methods, except that in parallelism the part must be held against a flat surface that acts as the datum element.

To measure parallelism using a surface plate and a height gauge, the inspector follows the following steps: