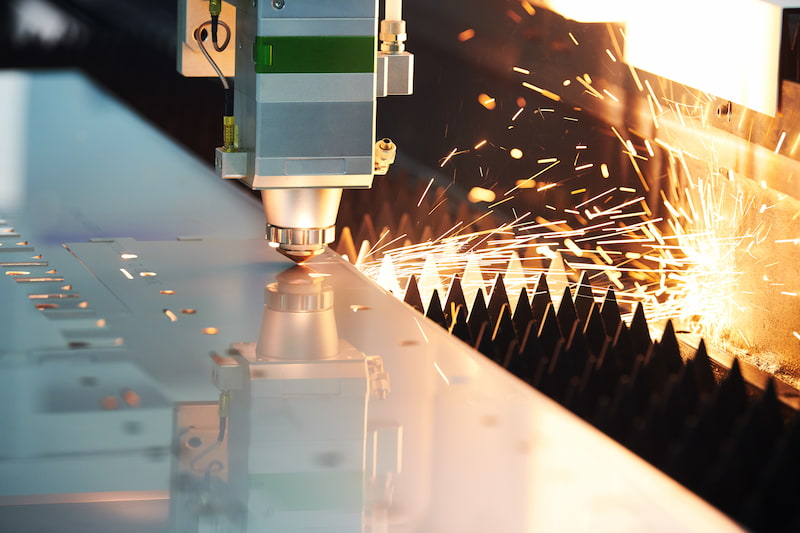 Lasers have been around for a long time but their use in commercial applications is quite recent. It took engineers a while to strengthen laser capabilities to a point where they could compete with traditional manufacturing methods in terms of cost, time and ease of use.

Fibre laser technology, for instance, was first developed back in the 60s. Back then, this technology was still in its nascent phase. Only in the 1990s did it become fit for commercial use. Since then, the technology has come a long way in terms of its applications and efficiency. In the 60s it was possible to only generate a few tens of milliwatts, today we have fibre lasers that can generate over 1000 watts with reliable final properties.

In this article, we will discuss how a fibre laser works, where it is used and why it is often the optimal choice when compared to alternatives. But first, let us understand what it is.

What Is a Fibre Laser?

Fibre lasers are a type of solid-state lasers that use optical fibres as their active gain medium. In these lasers, a fibre made of silicate or phosphate glass absorbs raw light from the pump laser diodes and transforms it into a laser beam with a specific wavelength.

To achieve this, the optical fibre is doped. Doping refers to the practice of mixing a rare-earth element into the fibre. By using different doping elements, laser beams can be created with a wide range of wavelengths.

Because of such a wide range of produced wavelengths, fibre lasers are perfect for a variety of applications such as laser cutting, texturing, cleaning, engraving, drilling, marking and welding. This also enables fibre lasers to find use in many different sectors such as medicine, defence, telecommunications, automotive, spectroscopy, electrical, manufacturing and transportation.

How a Fibre Laser Works

A fibre laser is named after its active gain medium which is an optical fibre. Any fibre laser machine that produces a well-collimated high-power laser does it in five main stages. These are as follows:

This is where the energy for the laser beam enters the system. In fibre lasers, we use electricity as the energy source. Diodes known as pump laser diodes convert electrical energy into light energy. In high-quality diodes, the conversion is reliable and efficient and produces light energy only with specific wavelengths.

Incidentally, low-quality laser diodes were one of the major obstacles that impeded the progress of laser technology for about 3 decades.

Collection and travel into the optical fibre

A coupler combines the light from multiple laser diodes into one. This coupler is a part of the optical fibre. It has multiple entry points on one side, each of which connects to a fibre from an individual laser diode.

On the other side, there’s a single exit point that connects to the main fibre. Once all the light is collected, it travels to the laser medium or the gain medium. 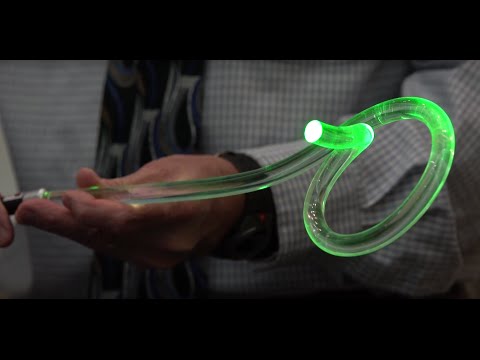 In the next stage, the laser diode’s light flows through the optical fibre to the laser medium. The fibre consists of two main components: the core and the cladding. The core is made of silica glass and provides the pathway for light. This core is covered by cladding. When the light reaches the cladding, all of it is reflected back into the core.

On further travel through the optical fibre, the light eventually reaches the doped part of the fibre. This part is known as the laser cavity.

Stimulated emission in the laser cavity

When the laser diode light reaches the doped fibre, it strikes the rare earth element’s atoms and excites its electrons to a higher energy level. In time, this leads to a population inversion which is necessary for the production of a standard laser.

Population inversion in laser refers to the state of a gain medium in which a greater number of electrons are in an excited state compared to those that are not. It is called population inversion because this is the opposite of the normal state where only a few atoms have excited electrons.

When some of these electrons naturally fall to lower energy levels, they emit photons of only a specific wavelength. These photons interact with other excited electrons, stimulating them to emit similar photons and retreat to their initial lower energy levels. This is the physical process of “stimulated emission” that is a part of the acronym LASER (Light Amplification by Stimulated Emission of Radiation).

The electrons that return to their original relaxed state are re-excited by the incoming light from pump diodes. Eventually, the process reaches an equilibrium between the excited and relaxed electrons, giving us a steady flow of raw laser light. This light needs to be refined for it to be used in different applications.

Amplification of raw laser light into a laser beam

Before using the raw laser light from the doped fibre in applications, it has to be strengthened first. In fibre lasers, this is done by using Fibre Bragg Gratings (FBGs). These gratings replace conventional dielectric mirrors by acting as mirrors of varying reflectivity.

The light jumps back and forth between the Bragg Grating. A portion of the laser light passes through in one direction while the remaining light is reflected into the laser cavity. The part that passes through the grating becomes the laser beam. This beam is then sent through an oscillator (and sometimes a combiner) to improve coherence and then delivered as output.

The main difference between these two processes is the source where the laser beam is created. As explained earlier, fibre laser source is silica glass mixed with a rare-earth element. On the other hand, CO2 laser source is a mixture of gases with CO2 being the main component.

Fibre lasers beat CO2 lasers almost on every front except the initial investment cost. For instance, CO2 lasers cannot cut many materials that are reflective. Fibre lasers handle better a greater number of those reflective metals such as copper, brass, aluminium and stainless steel. A fibre laser also requires less power and provides higher efficiency. All this at half the operating costs and five times the cutting speed of a CO2 laser (when cutting thin metals).

Although when cutting thicker materials (above 5mm) CO2 lasers are still generally preferred, the constant advances in fibre laser technology are widening the instances where this technology has the edge. Thus currently, it makes sense if your laser cutting service provider has access to both of these types of machines to accommodate different projects in an efficient way.

It also does not require a ceramic marking compound for laser engraving like a CO2 laser does. Although fibre lasers require a greater initial investment when compared to CO2 lasers, they are still a more cost-effective solution in the long run due to the lower Total Cost of Ownership (TCO).

Due to the wide range of possible power outputs, fibre lasers are effectively used in many different applications. Some of these are:

Generally, ytterbium-doped fibre lasers with an emission wavelength of 1064 nm are considered perfect for laser marking applications. These lasers can mark plastic and metals with permanent, high-contrast marks. OEMs, as well as suppliers, require laser marking machines for part identification such as barcodes, logos or other texts.

These machines may be manual or automated and can be customised to keep up with short production cycles. In addition to marking, fibre laser equipment can be used for annealing, etching and engraving.

Fibre lasers can effectively clean metal surfaces of paint, oxide, rust, etc. This process is known as laser cleaning. The process can be automated and customised for different production line parameters.

Another important application for these lasers is in welding services. Fibre laser welding is one of the most promising upcoming technologies that is gaining market share fast due to the various benefits the process offers. Laser welding provides faster speeds, greater precision, lower deformation, higher quality and efficiency compared to traditional methods.

Laser cutting is one of the most researched areas of fibre laser application. It can handle complex cuts with impressive edge quality. This makes it optimal for parts with close tolerances. Its adoption is increasing across the board with fabricators due to its long list of benefits. Let us take a look at what these are in the next section.

Compared to other laser types, a fibre laser has several characteristics which make it ideal for wider commercial use. We have divided these benefits into four categories: